Chinese authorities seem to be putting things in order rather than declaring war on crypto, aiming to further weaken the U.S. economy. 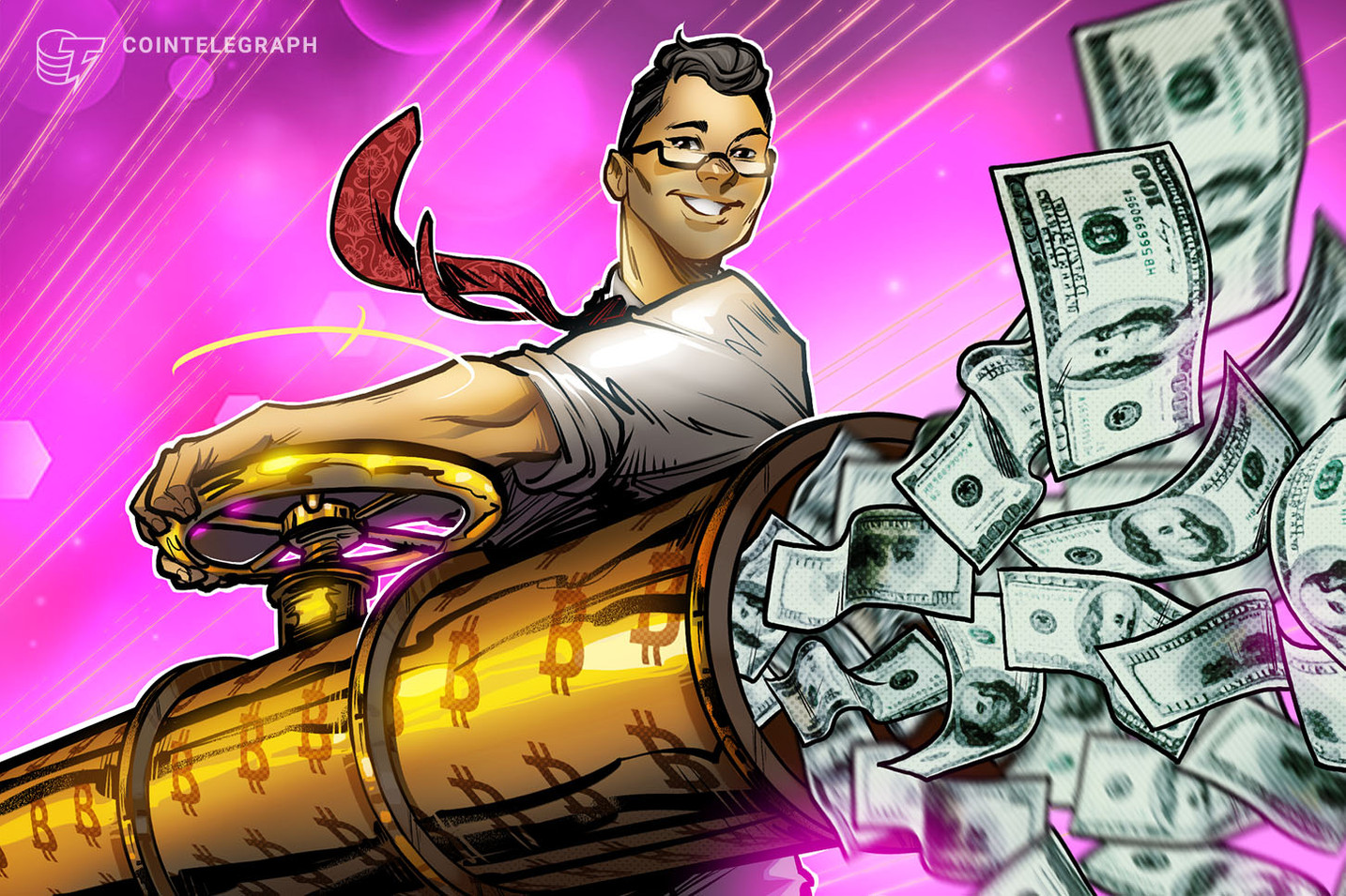 The ongoing United States-China trade war is in its fourth year. Former U.S. President Donald Trump saw different results from what he initially expected: America has taken a hit from higher tariffs and sanctions against Chinese companies and hasn’t benefited from it nearly to the same extent. It has cost the country up to 245,000 jobs. The U.S. Chamber of Commerce calculated that the situation puts the exports of each state at risk. For example, the damage to Florida’s exports alone has already reached $1.9 billion.

At the same time, China was taking a smarter approach: It not only imposed reciprocal sanctions and exported its products through intermediary countries (Vietnam, Taiwan and Mexico), but also made the U.S. pay for unsecured and poorly regulated assets — cryptocurrency.

Related: US-China trade war and its effect on cryptocurrencies

The United States annually inject billions of dollars into the Chinese economy without even suspecting it. The reason is that the majority of Bitcoin (BTC), which is exchanged mainly for U.S. dollars worldwide, is mined in China. It hosts 65% of all mining farms.

To earn Bitcoin rewards, powerful computers solve complex math problems 24/7. Part of the newly mined coins goes directly to crypto exchanges, while the rest can be kept in the miners’ crypto wallets, but is eventually sold to dollars. On average, 900 BTC are mined every day, and the total daily revenue is about $31 million (as of the end of June). That means that in just a year, the miners have earned over $10 billion. 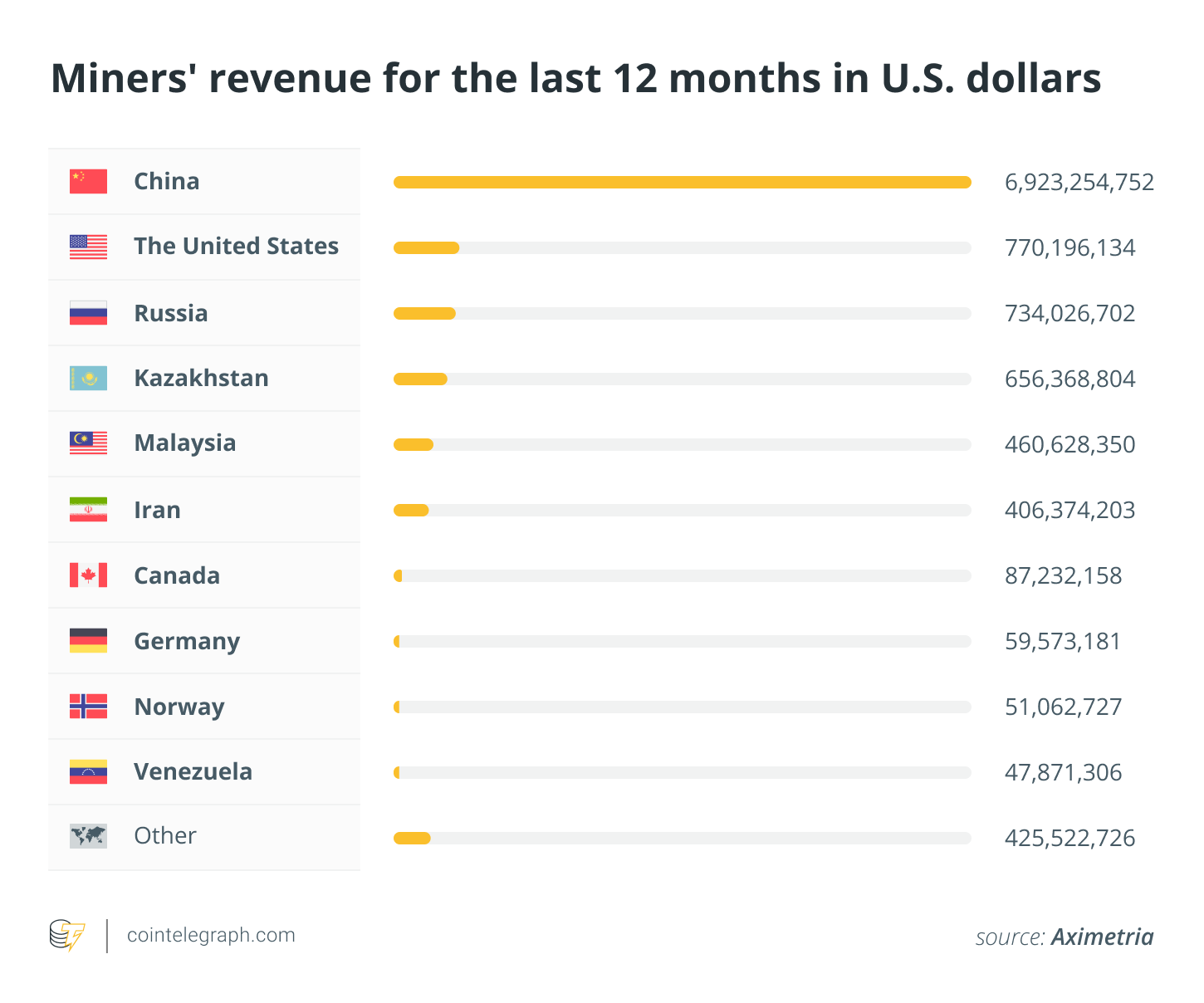 Taking into account China’s share of mining farms, the local miners have earned about $7 billion since last summer. If both the price of Bitcoin and its popularity keep increasing, the revenue will double or even triple each year. In one way or another, the money will circulate throughout the country’s economy: It will be spent, saved or invested.

Under the Party’s control

The Chinese government is well aware of the volume and significance of U.S. dollar investments through cryptocurrencies. Despite the heavily increasing regulation, the authorities are obviously not going to ban Bitcoin.

China restricted crypto transactions for banks and payment companies back in 2013. In 2017, the authorities also shut down local crypto exchanges and blocked access to foreign platforms. That said, locals could legally own cryptocurrency all this time. What we see now is essentially a reminder of the previous restrictions imposed on financial institutions instead of the introduction of new ones. On one hand, the Chinese authorities want to prevent the “transmission of individual risks to the social field,” and on the other hand, they leave the door wide open for foreign investors.

Read the article:  Patreon Considers Allowing Creators to Use Crypto for Monetization

At the same time, the Chinese authorities have begun to restrict mining, which concerns many people on the market. The official reasons are excessive energy consumption and carbon dioxide emissions that prevent the country from achieving carbon neutrality by 2060. But the real situation is a bit different from official statements.

First, the Chinese miners already source cheaper hydroelectricity, which is highly developed in southern provinces, and only switch to fossil-based fuel during the dry winter season when they migrate to the north.

Secondly, the authorities have fully banned new mining projects and the existing ones in three regions: Qinghai, Inner Mongolia and Xinjiang. Other provinces that are rich in hydropower resources, like Yunnan or Sichuan, are in no hurry to impose a total ban. While Yunnan was planning to shut down only illegal BTC mining farms “with a campaign against misuse of electricity,” later in June it was reported that all mining farms in Yunnan Province were shutted down.

Chinese authorities seem to be putting things in order rather than declaring war on cryptocurrencies. The technological limitations of the Bitcoin supply are to work in China’s favor: It allows the country to influence the price of the crypto while keeping it in miners’ possession and without selling it on financial markets. However, if the restrictions keep tightening, the mining power may be redistributed between other countries. The Chinese mining equipment manufacturers — BTC.TOP, Huobi and HashCow — announced that they are suspending domestic sales and expanding their international presence, including to North America.

Who will pick up the idea

At face value, the possibility of Chinese miners moving to North America seems beneficial to the United States. But experts pointed out that the continent doesn’t have a lot of idle energy capacity. Besides, moving countries takes time that competitors can take advantage of.

The idea of ​​taking control over not only crypto transactions but also Bitcoin mining is quickly gaining traction in developing countries. In Iran, mining has become one of the most accessible industries amid tough U.S. sanctions. The Iranian government is taking almost the same path as China: The authorities are to ban the use of cryptocurrencies generated abroad, but they allow paying for imported goods with domestically mined coins. Over the past year, Iran earned more than $400 million from cryptocurrency mining, with the United States’ revenue being only twice as much.

Read the article:  Mark Cuban and Voyager CEO Advise How to Get Into Crypto, Offer Tips for New Investors

In this context, Kazakhstan seems to be the most politically neutral country. Here, a huge mining center by Enegix with a capacity of 180 MW, and up to 50,000 mining rigs will start operating in September. What’s more, Chinese manufacturer of mining equipment Canaan has set up a new service center in Kazakhstan.

China might exploit the export of their crypto farms as a means to further weaken the U.S. economy, while the U.S. government has no significant leverage to stop the dollar outflow caused by crypto transactions. Imposing a crypto ban for Americans would simply be undemocratic.

The only option for the U.S. government is to weaken the appeal of Bitcoin through every possible means. This would explain why Elon Musk, the owner of some of the largest American companies, Tesla and SpaceX, suddenly switched from supporting Bitcoin to criticizing its environmental impact.

The same thing happened to Greenpeace, which no longer accepts crypto donations, even though it had been doing so for the past seven years. It seems that the escalating campaign against Bitcoin has more to do with politics rather than the environment.

Alex Axelrod is the founder and CEO of Aximetria and Pay Reverse. He is also a serial entrepreneur with over a decade of experience in leading technological roles. He was the director of big data at the research and development center of JSFC AFK Systems. Prior to this role, Alex worked for Mobile TeleSystems, the largest telecom provider in Russia, where he headed the antifraud and cybersecurity systems development.

Sidus Heroes CEO Dan Khomenko Talks About the Economics of Play-to-Earn Blockchain Games, NFTs and the Metaverse
Chinese authorities seem to be putting things in order rather than declaring war on
0